On July 12, 2022, the Patent Trial and Appeal Board (PTAB) of the United States Patent and Trademark Office ruled to uphold the validity of VPR Brands Patent and denied institution of the petition for inter partes review (IPR) filed by Jupiter Research, LLC in Case No. IPR2022-00299 seeking to invalidate the Company’s US Patent number 8,205,622 B2. The decision of the PTAB is not appealable.

The company owns Intellectual Property which is one of the original Patents filed for electronic cigarette technology. This Patent dates to 2009 and includes independent claims covering electronic cigarette products containing an electric airflow sensor, including a sensor comprised of a diaphragm microphone. The sensor turns the battery on and off, and covers most auto-draw, button less e-cigarettes, cig-a-likes, pod devices and vaporizers using an airflow sensor rather than a button.

The PTAB determined in its decision denying institution Jupiter did not establish a reasonable likelihood that claims 13 through 18 of the Company’s ‘622 patent are unpatentable. The PTAB decision analyzed the prior art presented by Jupiter and rejected all prior art references.

The PTAB’s decision denying institution clears the way for the Company’s infringement litigation against Jupiter pending in the District of Arizona to proceed. Claim construction in that pending suit has already been completed. While some discovery still remains, the case should proceed to pre-trial motions this year.

The Company is represented by SRIPLAW, P.A. in the Arizona case as well as in the IPR review proceeding before the PTAB 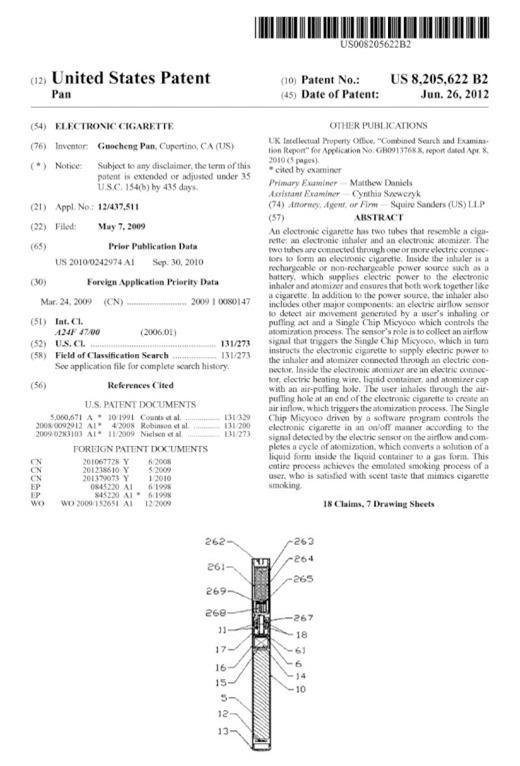 VPR Brands along with SRIPLAW has started to identify and notify over 50 of the leading companies using the Auto Draw Technology and VPR Brands intends to vigorously enforce its Patent. These companies were prioritized, based on sales volume and popularity. Most recently VPR Brands LP and its legal team, headed by Joel B Rothman of SRIPLAW, have filed litigation against 9 of the companies. Additional lawsuits will continue to be filed as necessary to protect the company’s Intellectual Property rights.

The vaping industry has matured in size and continues to grow. The company believes that its patent puts them in a unique position to capitalize on the recent surge in e-cigarette/vape usage that resulted in what some analysts estimate to be a $6 billion e-cigarette market, not including devices sold for cannabis and CBD.

A majority of the vaping devices sold in the U.S. now utilize an auto-draw/button-less technology. The company is investigating all button-less vape devices within the nicotine, CBD, and cannabis space that initiate vaporization from the user’s airflow inhalation as they would be suspect of infringement.

The company may also seek a buyer for this patent in the future. As an example of past patent sales for electronic cigarettes, another company, Ruyan, gained a U.S. patent for its electronic cigarette product. In August 2013, Imperial Tobacco Group purchased the intellectual property behind the Ruyan e-cigarette for $75 million. The market was barely what it is today and has grown tremendously since 2013.

On March 18, 2022, the Company entered into a Settlement Agreement (the “XL Settlement Agreement”) by and between the Company on the one hand, and XL Vape, LLC (“XL”), VGOD LLC (“VGOD”), and Saltnic LLC (“Saltnic” and collectively with XL and VGOD, the “XL Parties”), on the other hand. The Company previously filed a lawsuit in the United States District Court for the Central District of California (Civil Action No. 2:21-cv-01110(MCS)) alleging patent infringement of the Patent by XL (the “XL Action”). Pursuant to the terms of the XL Settlement Agreement, the Company and the XL Parties agreed to settle the XL Action. In addition, the XL Parties agreed to pay the Company $155,000. The Company also granted each of the XL Parties a fully paid-up, royalty-free, non-exclusive license to practice the invention set forth in the Patent and all related patents and applications, domestic and foreign.

VPR Brands is a technology company, which develops consumer and business products based on the newest cutting-edge technologies and whose assets include issued a U.S. patent for atomization-related products including technology for medical marijuana vaporizers and electronic cigarette products and components. The company is also engaged in product development for the vapor or vaping market, including e-liquids, vaporizers, and electronic cigarettes (also known as e-cigarettes) which are devices that deliver nicotine and or cannabis through atomization or vaping, and without smoke and other chemical constituents typically found in traditional products. For more information about VPR Brands, please visit the company on the web at www.vprbrands.com

This news release contains statements that involve expectations, plans or intentions, and other factors discussed from time to time in the company’s Securities and Exchange Commission filings. These statements are forward-looking and are subject to risks and uncertainties, so actual results may vary materially. The company cautions readers not to place undue reliance on any forward-looking statements, which speak only as of the date made. The company disclaims any obligation subsequently to revise any forward-looking statements to reflect events or circumstances after the date of such statements or to reflect the occurrence of anticipated or unanticipated events.